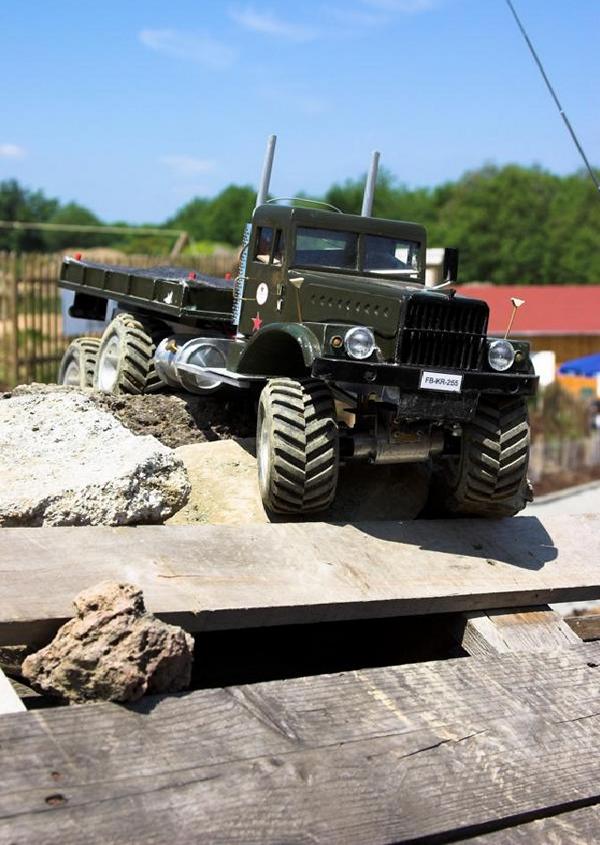 If you work as metalworker and your brother is model builder it isn’t so easy. All the time you are faced with new ideas, which should be built. And at this time you are infected by the model-virus.

It started up with the curved ladder frame of a Mercedes Unimog. In this way I did two parts and built up a Unimog for my own. This off-road-truck is still in use with some modifications over the years. In the autumn 2004 my brother, Arnd, came to me and had a new idea. He brought the blueprint of worm-axles and asked me to make some. And like the parts in the past some axles were made for me, too. A truck was not planed at this time.

The axles worked fine in the FAUN L908SA of my brother. So the test was done and the truck could be a little bit larger. The number of the axles and the desire for a truck with a long engine-hood showed the direction.

The truck should be really representative.

At the big model-exhibition in Sinsheim I talked to a friend, Herman Popp, about the fact that there are really a lot of Unimog on the off-road course. He promised me to send me a book about pipeline construction in Russia. In this book my truck was pictured. The write-up reminded me about my time in the open-cast mining in western Germany. There I worked in the pipeline-section.

So the idea was finally born. It should be a KRAZ 255b. 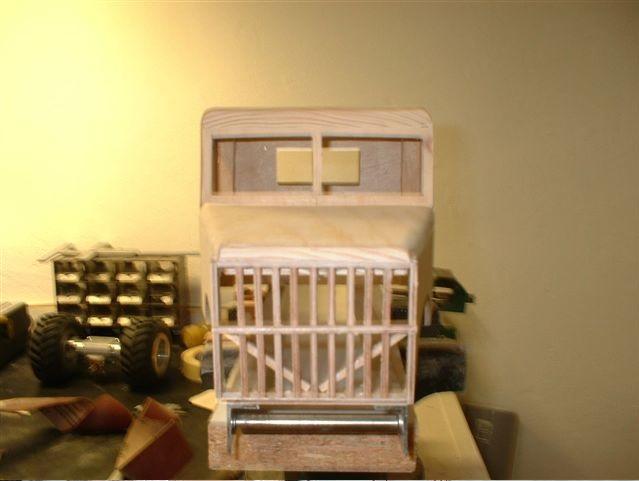 This Russian truck is really an impressive off-road-truck. The total width is 280 cm (110.23”) and so you won’t find this truck so often on German roads. Originated was the 255 from the 214, the biggest differences are the tires. On the 255 the tires are much bigger. Both trucks were built by the Ukrainian Truck Company KrAZ (Кременчугский автомобильный завод/ Kremenchuts'ky Avtomobil'ny Zavod) mostly used by the Russian army but also by pipeline construction in the taiga. The KrAZ which you can find at our time in Germany were used by the army of the German Democratic Republic before the iron curtain was fallen. 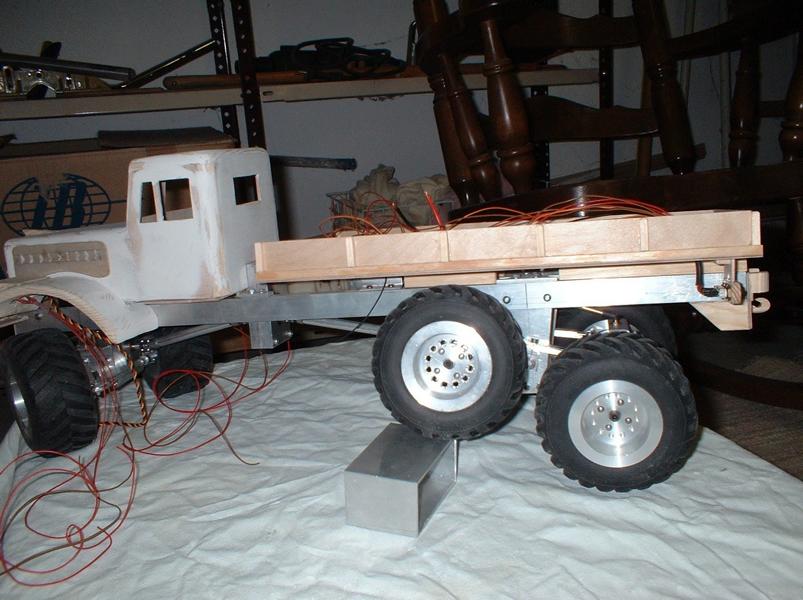 Some wrecking services and historic groups bought these trucks and saved them before scrapping.

So you can find a lot of pictures of this truck in the world-wide-web. Most of them are underlined by Cyrillic letters. A detailed blue print was found and stretched to the size I needed.

I didn’t want to reinvent the wheel by the construction. So the ladder frame was build by two aluminum U-profiles from the do-it-yourself store hold by distance pieces. To the ladder frame the screw axis were suspended by compound spring at the front and oscillating axle at the back. 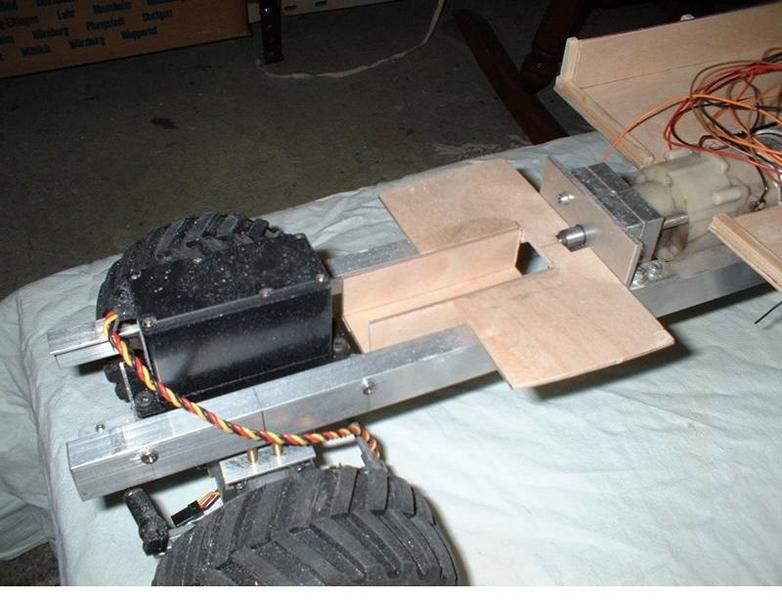 The standing torque of 247 Ncm at 6V is just enough for the steering. The quaterscale-servo is placed in a separate frame directly on the front axle. So no action can jam the steering.

The main engine is taken from a cordless screwdriver. With two gears of the planetary drive the truck have power on the one hand and speed on the other hand. Such cordless screwdrivers are not so expensive and you can buy it at every do-it-yourself-store.

The construction of the ladder frame and hanging is simple set up as you can see. 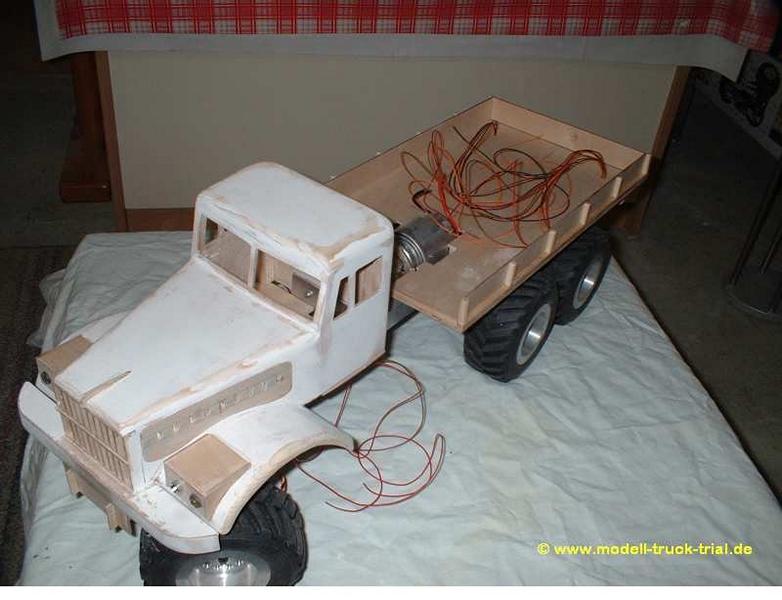 The effective length of the truck is 63 cm (24.80”). This length is normally to long for a competition truck but I didn’t want to have a truck to run for victories. I want a truck which is eye-catching and which is remindful to the visitors at the exhibitions.

So the chassis was build up in mature technology.

With the body I wanted to break new grounds. The body should be build from wood. May be you wondering that a metalworker build up his carriage by this material. Wood is more stable and easier to work with as you believe.

The main tool was a small buzz saw from Proxxon. Most parts of the body are edged. So the cutting of the parts could be done easily and fast. With fast-drying glue the components were fitted. The fenders at the front were milled from a full block of wood. At the second try the fenders fitted. The warping of the wood were filled with putty and afterwards grounded. It’s a pity, that the structure of the wood could not be seen anymore. 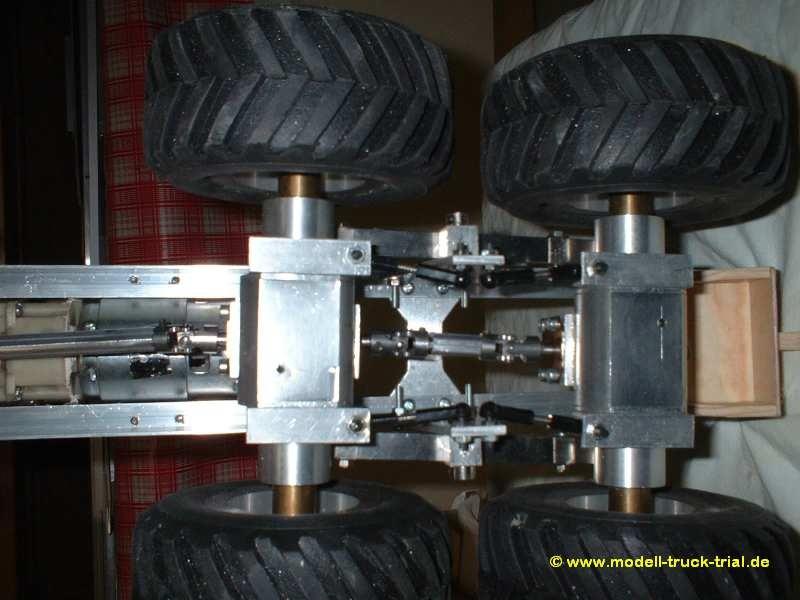 The roof-construction of the platform had its own problems. This construction should be build from tubes of brass. My soldering station didn’t run hot enough to braze the tubes together. So I use a trick. The main joist was made of wood and was glued with the tubes of brass. Until the wood glue was dry the construction was fixed by cable straps. It’s strange, but it works. The tarpaulin was made from black cloth. The verges were tuned up, filled with an elastic strap, and glued. I never thought about to sew this textile.

So the KrAZ could start for the first ride. This test showed that the barycenter went to high. So this construction was made for rubbish. So a simple cloth was cut in right way and covered now the platform. Simple thinks are sometime the best.

Totally I couldn’t hide my working background. All mounting parts were made from aluminum. These parts were not painted and give big contrast to the rest of the body which is painted in olive green (RAL 6006). Already during the construction the cruise control was installed. I chose the SERVONAUT T20. This cruise control is especially designed for truck-trial and crawling. The T20 have starting aid and separate break, both is interesting for smooth off-road driving. The BEC system is set up to 5V / 3A, so no problem to handle the 1 / 4 servo. Nice to have is the light and break-light function of the T20. Also off-road vehicles should be seen in the dark. 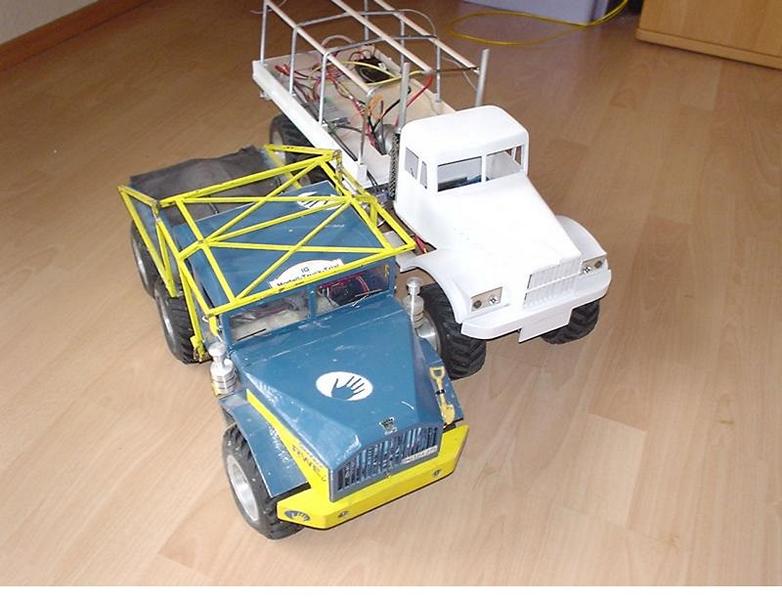 The KraZ was ready to drive. At our usual Sunday-meeting the truck should have the first big test. At this test the suspension spring slid of the spring saddle, then the cardan shaft sliped apart and so the last axle had no propulsion anymore. The second negative part was the high balance point of the truck. Positive was the small turn radius.

So the truck needed more tests. The competition on the exhibition in Sinsheim was just two weeks away.

The teething troubles of the KrAZ were eliminated. The next test should be outside at the River Rhine. The test ran well. But suddenly the gearbox ran free. No transmission to the wheels. I had had a bad feeling when I put the parts together. So back home and opened the gearbox. The problem was fixed by drilling a deeper hole in the axle, so the grub screw meshed in it.

So the competition could come. 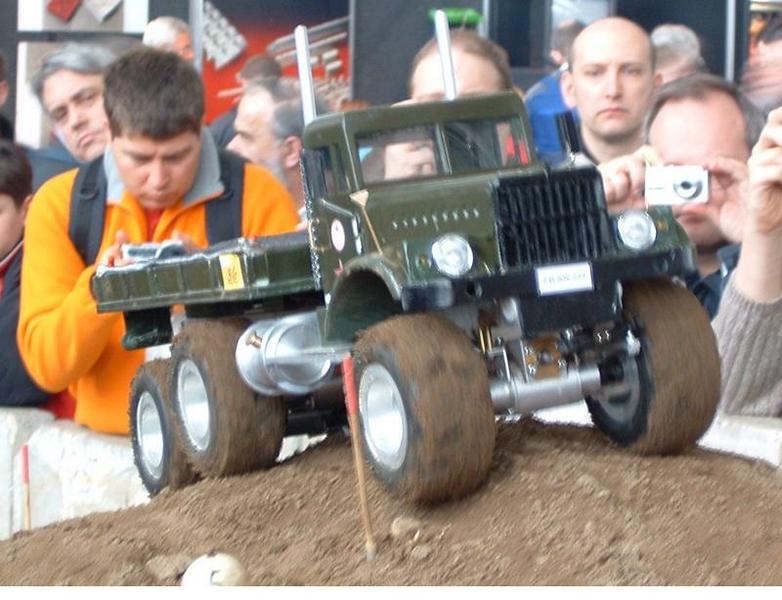 The exhibition with it competition came and the 255b worked very fine. Switched on, driving, switched off. No problems. That’s it a model should work.

The reaction of the visitors, especially who know this truck from the past in eastern Germany, were great. Many of them told me stories about here time at the army and the KrAZ 255b.

As expected the truck was to long for a competition. The next evolution is planed.

New tires will be placed on it. 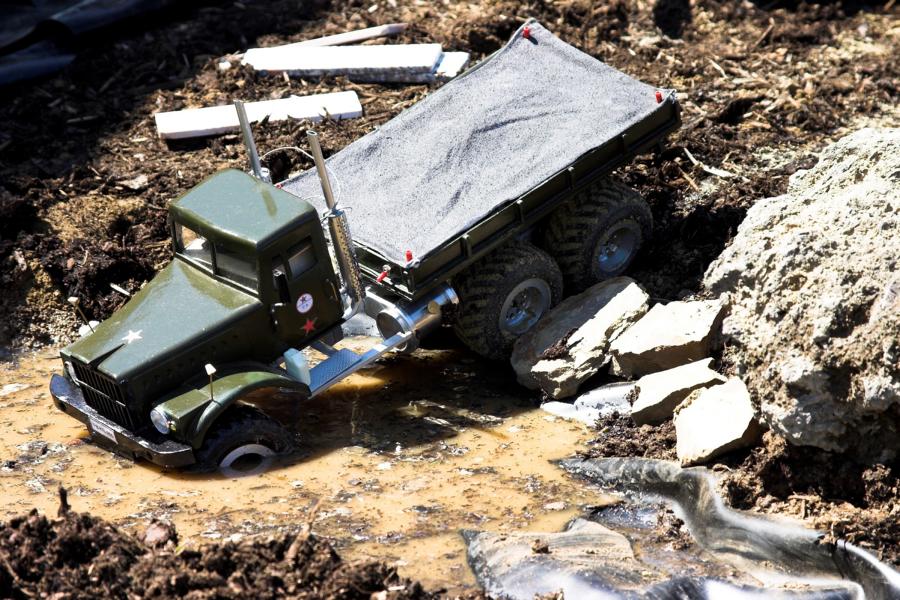 And there is still the Unimog from the beginning which should have part of the evolution.